Scrapping your right to know: HB 125 chips away

From the New Hampshire Union Leader

A bill before the New Hampshire Senate today would casually strip New Hampshire citizens of their right to know what their government is up to.  Our readers deserve to know about this threat.

The bill is HB 125; it seeks to prevent the release of booking photos by police departments except in very limited circumstances.  The supporters of this legislation have two small problems with this assault on government transparency and accountability, the Right to Know Law and the New Hampshire Constitution.

The former is easily dismissed by declaring in HB 125 that booking photos would no longer be subject to the Right to Know Law (RSA 91-A).  Regarding the latter, even the Senate’s legal counsel questioned if HB 125 would stand up to constitutional scrutiny considering Article 8 of the New Hampshire Bill of Rights instructs that “the public’s right of access to governmental proceedings and records shall not be unreasonably restricted.”

We agree with the New Hampshire Bill of Rights and do not believe that drawing a shroud over police actions is a reasonable restriction.   Proponents argue that the arrested have a right to privacy.  The public has a much more fundamental right to know whom the government has  plucked from a street corner, and what condition they were in at the time.

Ten years ago a man was arrested at a Manchester bar after a scuffle with several Manchester Police officers.  The man’s name and charges of simple assault, disorderly conduct, resisting arrest, and criminal mischief were released but it was the booking photo of a bruised and bloodied face that told a tale of potential police misconduct. 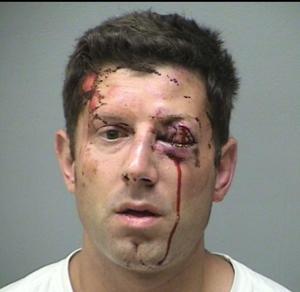 That man would receive a six figure settlement for his two broken eye sockets and broken nose.  More importantly, the release of that booking photo (shown here) launched an investigation into the conduct of those officers.  It is shocking that during a national outcry for police accountability and transparency a bill such as this would even be contemplated.  I call on our conscientious New Hampshire Senators to keep New Hampshire a beacon of transparency and vote down this bill.