On Thursday NHPR reported the Middlesex County District Attorney and police in four towns are investigating several incidents of vandalism at the homes of two of its journalists, including graffiti that appeared to threaten further attacks.

A reporter’s current and former homes in Melrose, Mass., and Hampstead, N.H., were vandalized Saturday, May 21, police said. In Melrose, a person spray-painted the words “Just the beginning!” in red on the home and threw a brick through a window.

In Hampstead, an obscenity was spray-painted on the garage door and a brick was thrown at the house, police said.

On April 24, the same obscenity was spray-painted in red on the same Hampstead residence, as well as homes in Concord and Hanover, N.H. Bricks were thrown at each house, breaking windows and causing other damage, according to police. 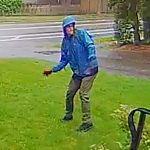 Authorities released a surveillance video of a man throwing a brick at the Melrose home. Police described the suspect as a slender white man, about 5 feet 10 inches, wearing a light blue hooded raincoat, khaki pants, black sneakers and a blue-green backpack.

Anyone with information on the incident is asked to call the Melrose police at 781-665-1212.

The New Hampshire Press Association is distressed by the news that New Hampshire journalists and their family members have been the victims of targeted vandalism at homes in New Hampshire and Massachusetts.  Any attempts to prevent journalists from freely exercising their first amendment rights are intolerable in a free society.

We hope the perpetrators of these heinous acts are swiftly brought to justice and implore the public to assist law enforcement with the identification of those responsible.  Members of the press are not easily deterred.  Our thoughts at the NHPA are with our fellow journalists.

We learned that NH Public Radio reporters and their families have been the victims of vandalism to their homes in New Hampshire and Massachusetts.

These journalists are our colleagues, partners in our collaborative and our friends. They, like the rest of us in the field, do this work as a service to all of our communities. Cowardly acts of vandalism or violence against these or any journalist should not be tolerated by our communities. This should be unacceptable to all of us.

We are appalled at these acts and urge anyone with information to alert the proper authorities to bring the perpetrator to justice.

As for our partners at NHPR, we stand in solidarity with you and your families.